skip to main | skip to sidebar

"Top 100 in Finance Magazine" recently included Andrea Baumann Lustig. A profile with details about her business and civic involvement can be found here.

The New York Times' T Magazine profiled Richard Greenberg in its March 3 issue, ahead of the April revival of Greenberg's 2002 baseball-themed play "Take Me Out" at the Second Stage Theater. Titled "The Bard of American Privilege," the article reviews Greenberg's career and devotion to craft, along comparisons of him to Noël Coward.  The article reflects,

Indeed, in an era when some playwrights have become as famous as the actors in their casts, when the experience of going to the theater, the whole Instagram-the-Playbill moment of it all, is often just as motivating to ticket buyers as the play itself, Greenberg remains one of the few dramatists who’s remained relevant simply for what he’s put on the page.

Two articles in the February 12 issue of the Princeton Alumni Weekly and a February 6 podcast highlighted members of the Class of 1980. Covered in the editorial triple play were:

Posted by Van Wallach at 8:03 PM No comments:

David Bledsoe Digs into the Curse of the Washington Nationals

David Bledsoe will publish an e-book next month delving into the sources and extent of the playoffs curse afflicting the Washington Nationals, extending back into its days as the Montreal Expos. Titled Black Thursday, Blue Monday: In Search of the Curse of the Washington Nationals: A Baseball Whodunit, Bledsoe and the book were subject of a lengthy feature in the Washington Post on April 18. The article starts,


With the Washington Nationals protecting a one-run lead over the Chicago Cubs in the fifth inning of Game 5 of the 2017 National League Division Series, Manager Dusty Baker summoned his ace, Max Scherzer, from the bullpen for a rare relief appearance. No one could have predicted what would transpire over the next three outs at Nationals Park — a sequence of outcomes never witnessed in nearly 3 million half-innings of recorded history — but baseball fan David Bledsoe already had an idea how the game would end.

“I knew [the Nationals] were going to lose,” the 60-year-old Bledsoe, who watched Game 5 from the comfort of his Alexandria home, said in a phone interview this week. “There was no possibility they were going to win that game. It just had that supernatural air to it.” 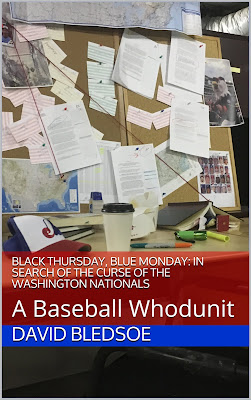 Black Thursday, Blue Monday is the first book for Bledsoe, a lawyer in the Washington area who grew up in South Carolina. His grandfather turned him into a baseball fan by listening to Milo Hamilton announce the Braves games (Joe Torre was his favorite player).  Bledsoe attended the Nationals’ first opening day at RFK Stadium in 2005, and has been at virtually every opening day since.  He believes the designated hitter is an abomination, and likely unconstitutional.

In discussing the book, Bledsoe notes some painful history, as covered in the Post article. In their last playoff appearance in 2018, with the Nats leading by a single run in Game 5, Max Scherzer, perhaps the best pitcher in baseball, suffered a meltdown unprecedented in the history of baseball, becoming the answer to an absurd trivia question in the process.

He asks, how to explain this bizarre history of failure for this powerhouse team?  There can only be one possible explanation.  They’re cursed.

The Red Sox had the Curse of the Bambino.  The Cubs had the Billy Goat Curse.  So what is the curse of the Nationals?  Calling his book "a a non-fiction murder mystery," Bledsoe poses the fateful question: Who killed the Nats?

Posted by Van Wallach at 5:26 PM No comments:

Richard Koret has turned a passion that dates back to his senior thesis into a new book, Heroic Fraud: How Sigmund Freud Got Away with Literary Murder, now available on Amazon. According to the book's website:

The book presents a kind of criminal case history of Moses and Monotheism, contending that Freud dissembled this much-criticized work in a kind of literary code. Most critics believe that this perplexing work — which claimed that Moses was an Egyptian killed by Hebrews — was a symptom of senility and Jewish self-hatred.

HEROIC FRAUD contends that Freud composed his final book so that its true meaning could only be understood by readers familiar with psychoanalysis. By tracing the many “Freudian slips” in the text and other symptomatic expression, one can decipher his latent intent much as a psychoanalyst might interpret the garbled manifest content of a dream.

Properly interpreted, the book is not hostile to the Jews but rather to their contemporary enemies, showing the root causes of anti-Semitism, conclusions too provocative to be outspoken at the time. Even now, his long-concealed ideas and conclusions are bound to arouse controversy and opposition. 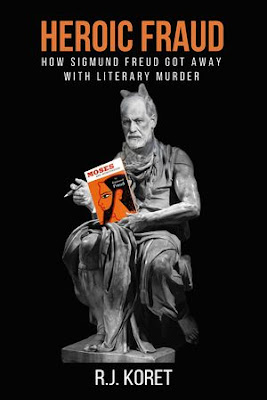 Koret says the idea for the book has its roots in his senior project in the religion department. He produced a rock 'n' roll musical called Life: A Biblical Serial, that debuted to less than rave reviews from the department. He was allowed to write a supplemental paper to go with it, and that was "A Freudian Interpretation of Joseph's Dreams," referring to the biblical story of Joseph and his dream interpretations in Egypt. Sigmund Freud had himself written about Joseph and the later Jews in Egypt in his last book, Moses and Monotheism. Freud wrote the book when he was ill with cancer in the 1930s and under pressure from the growing anti-semitism in Europe.


Koret later lived in Israel, and the idea of whether Freud had laced that last book, which critics called his worst, with secret meanings meant for future generations stayed in his mind. Koret researched the book in Vienna and decided to publish it on his own rather than wait for an academic press to accept it.

The book has a strong, if understated Princeton connection, thanks to Freud's friendship with German author Thomas Mann, the 1929 Nobel laureate in literature. Mann's personalities and writings, especially his series of novels on Joseph and his brothers, appear throughout the book. Mann lived in Princeton at 65 Stockton Street from about 1939 to 1942 and lectured at the university.

Heroic Fraud analyzes the first two chapters of Moses and Monotheism, with a sequel appearing this spring covering the last two chapters.
Posted by Van Wallach at 12:56 PM No comments:

On November 14, John Wetmore, producer of the cable TV series Perils for Pedestrians, testified before Maryland's Joint House and Senate Priorities Hearing. His comments dealt with the Maryland Transportation Authority, which owns and operates the toll roads and toll bridges in Maryland. One of those is the U.S. 301 Bridge over the Potomac River 50 miles south of Washington. Built in 1940, the narrow two-lane bridge is considered obsolete and will be replaced with a four-lane bridge. In 2008, the laws governing the MD Transportation Authority were modified to empower the head of the Authority to allow pedestrians and bicyclists on Authority facilities. This led in 2012 to the selection of a four-lane design that included a barrier-separated ped-bike path. However, the 2008 law did not require that the Authority accommodate peds and bikes, and the Hogan administration lacks a firm commitment to peds and bikes. The minor legal patch in 2008 has turned out to be inadequate, and a more comprehensive reform of the Maryland Transportation Authority is needed for this and future projects.

Senators and Delegates:
I would like to touch briefly on two topics tonight.

First, it has been half a century since the last major legislation governing the Maryland Transportation Authority. It is time to take a close look at the Authority to see if it meets the needs of the 21st Century.
In its current form, the Maryland Transportation Authority is concerned about only two things: moving automobiles and paying bondholders. It is stuck in a 1960s world where transportation agencies ignored their impact on the community and ignored the needs of pedestrians and bicyclists.
This outdated approach to transportation is very obvious with the replacement U.S. 301 Bridge over the Potomac. In a modern agency, a barrier-separated bicycle and pedestrian path would be a fundamental part of the bridge, and would be automatically included in the Scope of Work, as it was in the alternative selected in 2012. It is scandalous that the bike-ped path was downgraded to just a disposable option by the current administration.
The legislature needs to conduct an in-depth investigation into the Maryland Transportation Authority and explore what legislation is needed to ensure that the Authority meets the current needs of Maryland’s citizens.
Second, there are still many missing sidewalks along state roads in Montgomery County. For example, there is no sidewalk on either side of 16th Street (MD 390) where it meets Georgia Avenue (MD 97). There is no sidewalk on the west side of 16th Street from Lyttonsville Road to Spring Street.
In four years, the Purple Line will open, and residents of Montgomery Hills and the apartments along 16th Street will want to walk to the Woodside Station on 16th Street. Will they be able to walk there on opening day? Only if we get serious about building sidewalks now. There is no time to waste.
Thank you for your attention.
Posted by Van Wallach at 10:48 AM No comments: